1 June 1865: Bishop John Dalton’s pastoral letter grants Roman Catholic fisherman to fish on August 15, the date of the Feast of the Assumption, provided they gave the proceeds of their day’s catch to the Church. This ruling is the first known example of this practice, which still survives in some Newfoundland communities. More info: Dictionary of Canadian Biography.

3 June 1831: Public Ledger reports of a “riot” in Harbour Grace the previous May. Fishermen are owed shares and wages from the firm of Hugh William Danson, now declared insolvent. Fishermen “forcibly possess[] and roll[] upwards of a hundred casks of oil into the street” and threaten to destroy them. The men are eventually paid.

5 June 1844: Another fire in Harbour Grace, started in the house of a man named Finn. Eight widows with orphan children are left penniless.

12 June 1908: Football club formed at the offices of Archibald Bros. H.H. Archibald acts as chairman, with Stanley St. Hill as secretary. George Tapp, Edgar Davis, and Dugald Whiteway are selected as a committee to draft rules for the guidance of the club during the football season.

17 June 1928: Amelia Earhart leaves Trepassey and arrives in Burry Point, Wales, as passenger in the aircraft Friendship. She becomes the first female passenger to cross the Atlantic. 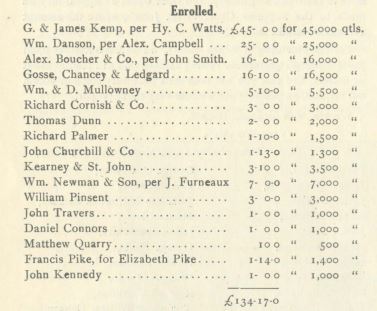