This past week, we’ve been busying celebrating the 85th anniversary of Amelia Earhart’s solo transatlantic flight from Harbour Grace, Newfoundland, to Culmore, Londonderry, Northern Ireland. On Saturday, May 20, around five hours and twenty minutes before Earhart’s takeoff, poet Heidi Greco launched her new poetry collection, Flightpaths: The Lost Journals of Amelia Earhart (Caitlin Press, 2017), from which she read to a small gathering of poets, patrons, aviators and historians at the Conception Bay Museum, Harbour Grace. In Flightpaths, Greco reimagines what may have happened to Earhart during her attempt to round the world along the equatorial line, using journal entries, fragmented documents and, well, poetry. Great poetry. However, the true story of Earhart’s 1932 transatlantic crossing from Harbour Grace may be “stranger than fiction.” 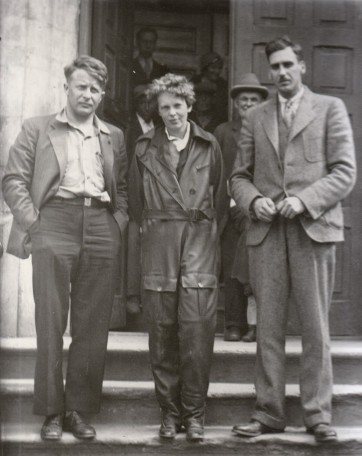 Ever since her transatlantic crossing as a passenger in 1928—the first for a woman at the time—from Trepassey, Newfoundland, to Burry Point, Wales, Earhart wanted to conquer the Atlantic Ocean as a pilot, without any help at the controls. On May 19, 1932, she, Ed Gorski, her mechanic, and Bernt Balchen, the prestigious Norwegian aviator, left Teterboro, New Jersey, at 3:15 p.m. and headed to Saint John, New Brunswick. Balchen did most of the flying and even registered Earhart’s Lockheed Vega in his own name, to avoid press attention.

Their eventual destination? Harbour Grace, from which many famed and ill-fated flights had taken off to “challenge the Atlantic.” At 2:00 p.m. local time, Earhart’s single-engine monoplane landed at the airstrip. From there, Earhart went to the Cochrane Hotel for a short rest; Balchen and Gorski stayed at the airfield to prepare the Lockheed Vega for takeoff. At the hotel, Earhart met the proprietress of the iconic establishment, Rose Archibald, whose gifts of tomato juice and a thermos of soup have become legendary in the town’s aviation history and lore.

Local Arthur Rogers then took Earhart and her company back to the airstrip, where she would leave at 7:20 p.m. A video of Earhart leaving Harbour Grace can be found here and on our YouTube page:

Four hours out from Harbour Grace, the plane’s exhaust manifold broke, and for the next ten hours flames shooting from the vent threatened the success of the flight. Soon the altimeter malfunctioned, which resulted in Earhart flying blind for five hours. And if that wasn’t enough, she dealt with thick clouds and ice developing on the wings of her aircraft.

Unable to make it to Paris as Lindbergh had in 1927, Earhart landed in a cow pasture belonging to the Gallagher family, just outside the small hamlet of Culmore, north of Londonderry, Northern Ireland. The record-breaking flight took fourteen hours and fifty-six minutes after her departure from Harbour Grace. 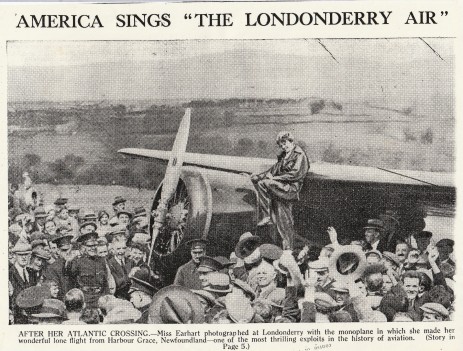 The Gallaghers offered Earhart a room for the night, which the aviatress accepted, so long as they “didn’t mind her clothes.” Famished, she told Mrs Gallagher that “tomato juice” had been her only meal since leaving America. Recently, BBC Radio Ulster’s Time of Our Lives program recovered Mrs Gallagher’s account of the event. You can listen to the audio here:

The next day, on May 22, Earhart waved the townspeople of Londonderry goodbye and headed for Hanworth Airfield, London, England, where a throng of reporters and fans were ready to greet her. 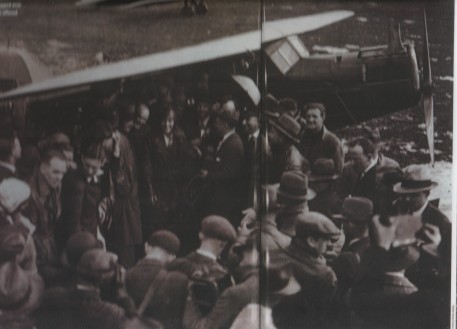 Earhart’s arrival at Hanworth Airfield, London, England, where reporters were ready to greet her on May 22, 1932.

The flight established Earhart as an international hero, making her the first woman to fly solo across the Atlantic. For her bravery, Earhart won many honours, including the Gold Medal from the National Geographic Society, presented by United States President Herbert Hoover, the Distinguished Flying Cross from the U.S. Congress, and the Cross of the Knight of the Legion of Honor from the French government.

In Her Own Words 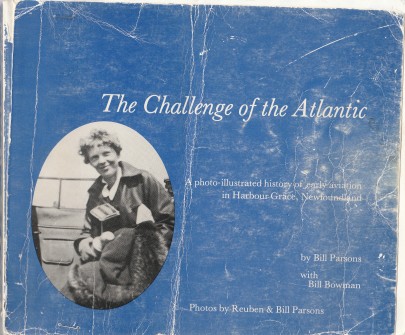 Our (well-worn) copy of Bill Parsons and Bill Bowman’s The Challenge of the Atlantic (Robinson-Blackmore Publishers, 1983).

In The Challenge of the Atlantic: A Photo-Illustrated History of Early Aviation in Harbour Grace, Newfoundland (Robinson-Blackmore Publishers, 1983), Bill Parsons and Bill Bowman’s excellent book on aviation in the town, Earhart’s own account of the flight is related:

“‘My start from Friday from Newfoundland was delayed a little bit to have time to fix up all the customs requirements. They gave me clearance papers, just as if I were Captain of a ship, and I filled a blank space, saying I was going to Paris. I wasn’t sure where I was going, but that did just as well as any other.

‘For the first four hours out I had beautiful weather and I would see the sky and ocean. Everything was lovely.

‘Then, all of a sudden, I ran into rain squalls and heavy wind. Then my exhaust manifold burnt out and bright red flames began shooting out the side.

‘I was not frightened—but it isn’t any fun to have those flames so near you. If there were an oil or gas leak it might cause trouble.

‘Then my altimeter went wrong—the first time in ten years of flying.

‘It was dark and cloudy and raining, and there was nothing for me to do but start climbing. I fixed an easy gradient and kept it up for some time.

‘Then I discovered my tachometer had frozen, so I knew I was high enough, [and] ice formation on my wings made me drop lower.

‘It was only twice after that I caught a glimpse of the ocean. Once I dropped down and saw little white waves under me, but looking down on mountains when man is missing from the picture I had no measure to tell how high the waves were, or how high I was above them—maybe 100 feet, maybe 300. When the morning of Saturday came, I was flying between two layers of clouds. The one below me was composed of little white wooly ones. After a while they all joined together and formed just a great white blanket, like a snowfall stretching in every direction.

‘When the sun broke through the blanket above me it was so blinding that, even with my smoked glasses, I had to come down and fly in the clouds for a while so I could see again.

‘It was here that my eye caught the second glimpse of the ocean. I saw waves running before a northwest wind and, thinking I was pretty far south, I turned due east. The result was that I hit Ireland in about the middle, whereas if I had gone on I probably would have passed the southern tip.

‘There must have been some error in the weather bureau’s calculations, because they thought I would miss the rain altogether. When I got into the squalls I suppose I was to be to the south and kept correcting to the north.

‘I had plenty of fuel and could have kept right on to Paris, maybe further, but my motor was straining; so after sighting land, which I knew must be Ireland, I decided to come down.

‘I could see peat bogs and thatched huts beneath me. I headed north along a railway track and, after a while, flew over Londonderry. Fifteen minutes later I had landed.'”

Parsons and Bowman’s book offers fascinating, detailed accounts, such as the one above, with high-quality photographs as accompaniments. Our friend Lisa Daly, an aviation historian and archaeologist, wrote a favourable review over on her blog, PlaneCrashGirl.ca. If you can track down a copy of The Challenge of the Atlantic, the text is well worth the effort.

• The Challenge of the Atlantic: Goodreads | Abebooks

Today we were lucky enough to welcome Justin Oakey, writer and director of Riverhead (2016), Flankers (2014), and The World Is Burning (2013); Xavier Georges, of ‘Sibelle Productions!’; and the cast and crew of Hors Circuits II to the Conception Bay Museum. Hors Circuits II is a documentary series which illuminates the oft-forgotten past of some of Newfoundland and Labrador’s most spectacular locales. 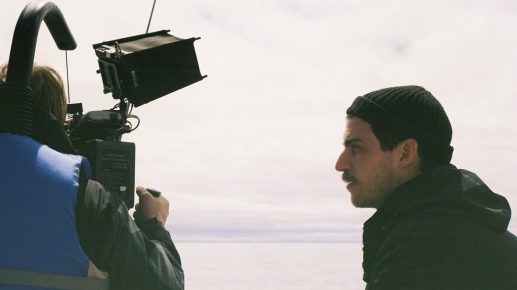 Our own Patrick Collins donned his acting hat and guided host Jennifer Breault through the Museum, highlighting the rich history of piracy, shipbuilding and mercantilism in Conception Bay. Look for the Museum to be featured in Season 2, Episode 7 of Hors Circuits II, due in late August.

In addition to film production, Georges and his team are involved in recreating arcane manmade structures with the latest twenty-first century digital technology. We were able to provide them with some architectural reproductions (1991) of the S.S. Kyle (courtesy of S. K. Foster), which Georges will use when designing his three-dimensional model of the famous transport and sealing vessel. 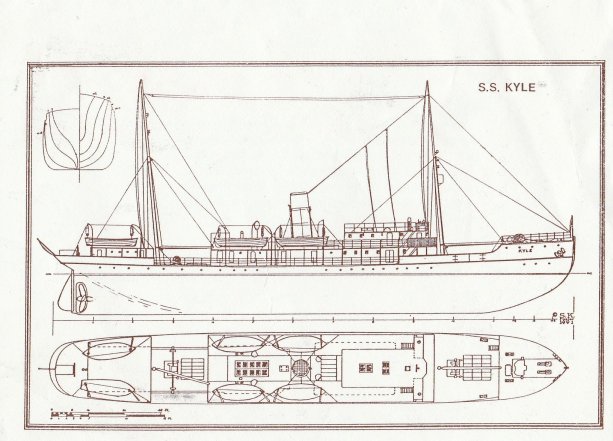 A reproduction of the architectural design of the S.S. Kyle, courtesy of S. K. Foster (1991).

Hors Circuits II is broadcast on UNIS TV and regular cable networks in Canada. As well, TV5 Monde brings the series to the world in 160 countries and 20 different languages.

Past episodes and further information about the series can be found on UNIS TV’s website. 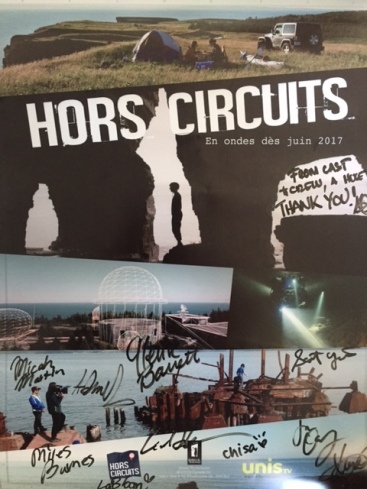 Xavier, Justin, Jennifer, and the rest of the crew were kind enough to sign us a promotional poster. Look out for Hors Circuits II Season 2, Episode 7 in late August 2017. 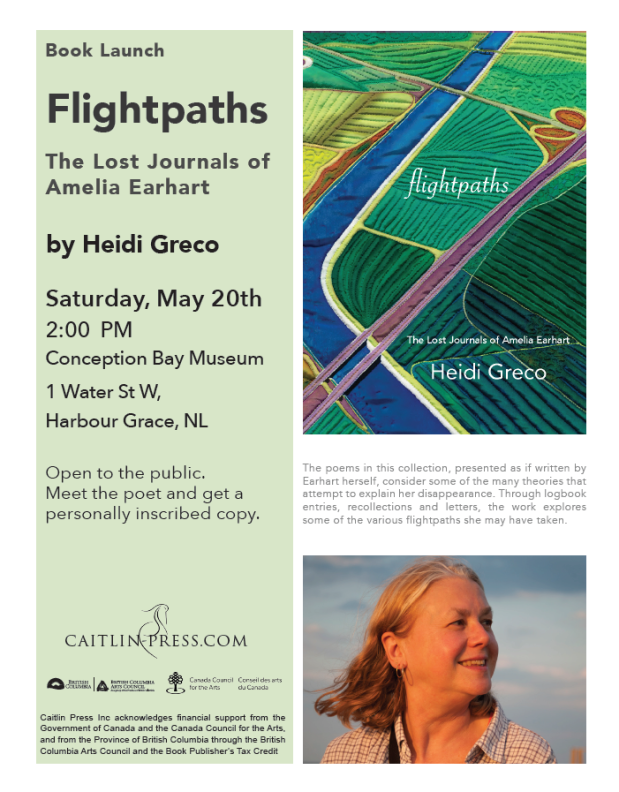 Our first post is pretty exciting: on Saturday, May 20th, 2017 at 2:00PM, we’ll be hosting award-winning poet Heidi Greco at the Conception Bay Museum, Harbour Grace, where she’ll be launching her great new collection of poems, Flightpaths: The Lost Journals of Amelia Earhart (Caitlin Press, 2017). Appropriately, the book “launch” will commemorate the literal launch of Amelia Earhart’s Lockheed Vega, which left the Harbour Grace airstrip on May 20th, 1932 on its transatlantic flight, 85 years ago. With Flightpaths, Greco reimagines and reinvigorates our understanding of the pioneer aviator, of both her life and her legend.

As per the press release from Caitlin Press, Flightpaths: The Lost Journals of Amelia Earhart is “presented as if written by Earhart herself, and considers some of the many theories that attempt to explain her disappearance. Through logbook entries, recollections and letters, the work explores some of the various flightpaths she may have taken. Ann Holtgren Pellegreno, the first to fly a Lockheed 10 Electra around the world on the Earhart Trail, praises Flightpaths: ‘In this unique and intriguing fictional tale, Heidi Greco convinces us that Amelia Earhart’s Lockheed 10 Electra went down near a remote Pacific island. This tragic event, and the disappearance of Amelia’s plane into the ocean, leaves the reader wondering what happened to this brave pilot who accepted the challenge of a world flight in 1937.’

“Being the first woman pilot to fly solo across the Atlantic wasn’t Earhart’s only feat of feminism, as evidenced by Greco’s painstaking research into the pilot’s life as a pacifist, poet, and punster. She was ahead of her time in so many ways, right down to the no-nonsense clothes she wore (many of them fashioned after her own designs). A bonafide Earhart expert, Greco fuses truth with poetic license, establishing a must-read book of verse.”

A blend of storytelling, fiction and history, Saturday promises to be a great afternoon. The event is open to the public, books will be available for sale, and all are welcome.

We hope to see you there!

Heidi Greco is a longtime resident of Surrey, BC. In addition to writing and editing, she often leads workshops on topics that range from ekphrastic poetry to chapbook making. She’s been an advocate for the literary arts in her community and was instrumental in establishing two distinct reading series, but she considers her greatest success to have been convincing her city to hire an official Poet Laureate. She writes in many genres, with poems, fiction, essays and book reviews to her credit. Her books include the novella Shrinking Violets, which was co-winner of the Ken Klonsky Award in 2011. Her work has also appeared in many anthologies, most recently in Make it True: Poetry from Cascadia (Leaf Press, 2015) and The Revolving City: 51 Poems and the Stories Behind Them (Anvil, 2015).