On behalf of our museum, we would like to share a portion of our Curator’s Final Report
for this tourist season (2019). We have had a very successful season, as the attendance
numbers below demonstrate: 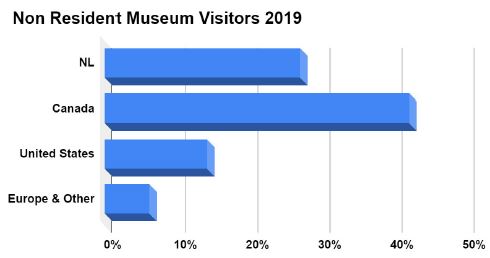 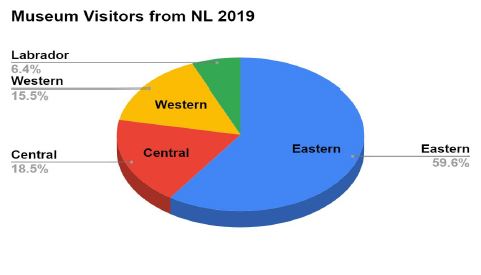 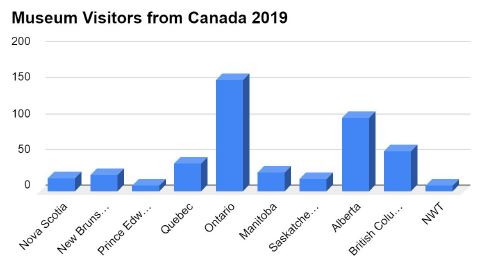 Museum visitors from other parts of Canada (2019) 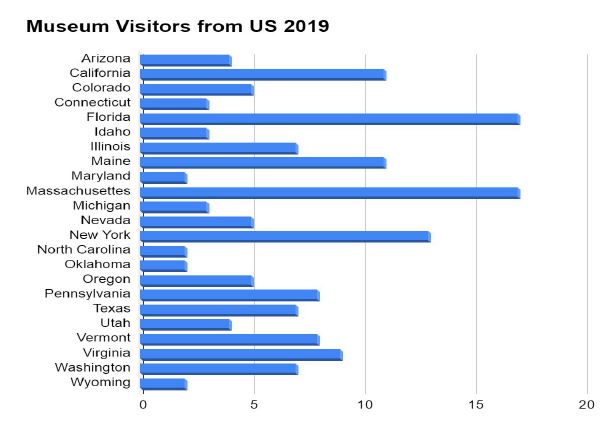 Museum visitors from the United States (2019) 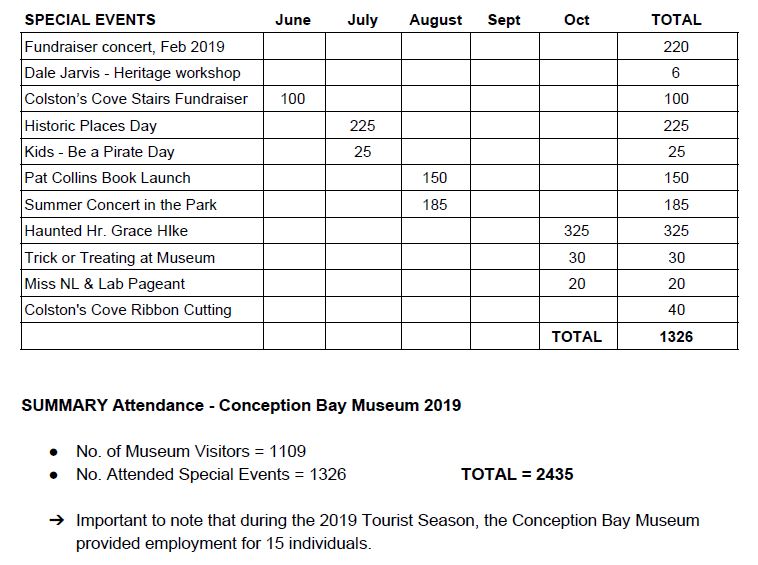 To conclude, the Conception Bay Museum has had a wonderful tourist season. Our
summer student tour guides performed exceptionally as they welcomed visitors from
all over the world daily. Our Board of Directors is to be commended for their hard work
and dedication to our museum – they go above and beyond! And most importantly, we
would like to thank ALL who have contributed to and supported our museum in any way. We appreciate it so much – our beautiful historic building by the sea wouldn’t exist
without you! See you in the spring!

Download this excerpt of the Curator’s report here [PDF].

On Saturday, November 9, the Conception Bay Museum’s latest tourism infrastructure project, the redesigned stairs to Colston’s Cove, were opened to the public in Harbour Grace. The Harbour Grace Board of Culture, Innovation & Business’ oral history research team were on hand to capture the opening and chat to locals about what the Museum means to the community. Check out the video below:

For future updates on the oral history series, visit the Harbour Grace Board of Culture, Innovation and Business’ Facebook and YouTube pages.

Thanks to Alyssa Shaw, Ryan Reynolds, Andrew Rossiter and Jo-Annah Yetman for the video. 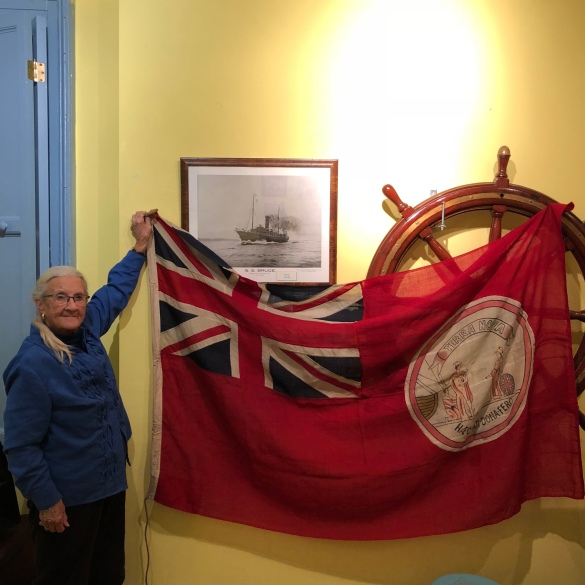 Thank you to Joy French-Coleman for donating this beautiful historic flag, the Red Ensign, to the Museum at our AGM on Thursday, November 14, 2019. This flag belonged to Joy’s parents, Gordon and Mary French, who once owned Victoria Manor.

The Red Ensign was officially endorsed by King Charles II in 1674; this authorization recognized it as the ensign of English merchant shipping. Later, during the Victorian era, the flag—with colonial badge—formed the basis as the Colony of Newfoundland’s civil ensign. Old oil paintings show red ensigns flying from the topmasts of Grand Banks schooners. Nineteenth-century photographs show red ensigns flown at Moravian mission stations and Hudson’s Bay Company trading posts along the Labrador Coast. 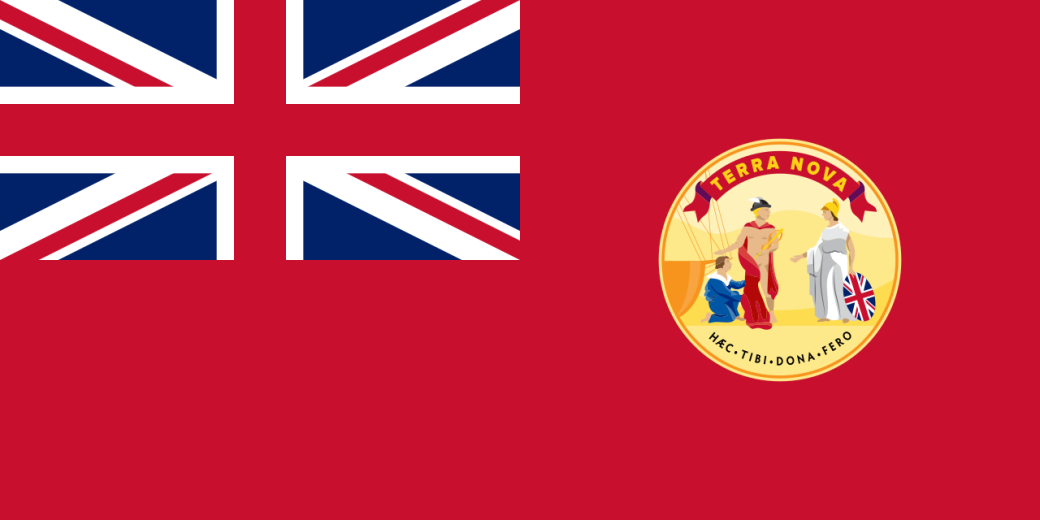 In 1904, the British Parliament designated a civil ensign specifically for Newfoundland. The Red and Blue Ensigns with the Great Seal of Newfoundland in the fly were the British Dominion’s colony’s official flags from 1904 until 1931, after which the Union Jack was adopted as Newfoundland’s official national flag and the ensigns reserved for shipping and marine identification—the Red Ensign to be flown by merchant shipping while the blue was flown by governmental ships. Neither ensign was immediately formally adopted by the Newfoundland National Assembly, which sat at the Colonial Building in St. John’s, when Newfoundland became an independent Dominion of the British Empire in 1907. It was not until the Newfoundland National Flag Act of 1931 that the Newfoundland parliament officially adopted the Union Jack as the national flag of Newfoundland and re-affirmed the red and blue ensigns as official flags for marine identification. Between 1907 and 1931, however, the red ensign gained wide enough use, both at sea and on land by civilians and government alike, that it was considered to be the national flag.

The badge in the ensigns consists of Mercury, the god of commerce and merchandise, presenting to Britannia a fisherman who, in a kneeling attitude, is offering the harvest of all the sea. Above the device in a scroll are the Latin words ‘Terra Nova‘, and below the motto Hæc Tibi Dona Fero or “These gifts I bring thee.” The seal was redesigned by Adelaine Lane, niece of Governor Sir Cavendish Boyle.

1 Oct. 1892: Mrs. Murphy’s farm in Mosquito grows heaviest head of cabbage in the district of Harbour Grace. Joseph Ross displays the 22.5lb-cabbage in the window of his Water St store.

5 Oct. 1850: John Munn, as President of the Commercial Society, presents Lieutenant W.J. Coen, of the Royal Newfoundland Company, with a sword, an honour of high esteem.

7 Oct. 1612: John Guy: “It was by sailing and rowing all night, we came to Havre de Grace as far as the Pirate’s Rock, where we remained until the 17th.” He lands fifteen tons of salt on the “highest point of land,” which he christens Colston’s Cove, after his brother-in-law, settler William Colston. More info: Profile: Colston’s Cove, Harbour Grace.

14 Oct. 1870: Ridley & Sons closes in Harbour Grace. A letter in historian W.A. Munn’s possession said, “A gloom had gone over the whole City, when they heard that Ridley was in trouble.” More info: “Reign & Ruin: A History of Ridley Hall.”

17 Oct. 1860: Harbour Grace Standard: “We were happy to find that it is in contemplation to open Harvey Street to the Riverhead. This road is being surveyed and marked out by a competent survey-or, Mr. Byrne, who came from St. John’s for that purpose, and we have no hesitation in stating that it will be one of the finest and most useful roads we have in our neighbourhood.”

22 Oct. 1929: Golden Hind heads for England. Diteman leaves a letter stating his intentions, but he is never heard from again.

25 Oct. 1771: Governor John Byron revokes Laurence Coughlan’s appointment as Justice of the Peace because of his “many unwarrantable proceedings to the great obstruction & discouragement of the trade & fishery.” More info: Dictionary of Canadian Biography.

31 Oct. 1836: Men march from Carbonear to Harbour Grace for the general election.