John (Jack) Shannon Munn was born in Harbour Grace in 1880, the son of William Punton Munn (son of prominent merchant John Munn) and Flora Clift LeMessurier. Shannon’s early life was spent at Bannerman House, a home originally built in 1799. William Punton Munn died in 1882, shortly after the birth of his only son, and Flora eventually remarried, taking J. Edgar Bowring, a member of the St. John’s mercantile elite, as a husband in 1888.

Shannon was schooled at Church of England College (now Bishop Feild) in St. John’s and continued his education in England in 1894, where he attended Forest School in Walthamstow, Essex.

In his spare time, Shannon took an interest in cricket, a British sport introduced to Newfoundland in the late nineteenth century to reasonable popularity. Clubs were active in St. John’s and Harbour Grace, and Shannon’s interest probably stemmed from his childhood in both places. During his time at Forest School, he was a regular in their first XI; in his last season, he took 55 wickets at an average of 13.96.

Shannon continued to play the sport at Oxford University, where he attended Hertford College. At first-class level, he obtained his best statistical season in his rookie year: in 1900 he took 13 wickets at an average of 16.76, with his best individual performance coming against Worcestershire at Oxford’s cricket ground. His teammates included some famous names in cricket: Bernard Bosanquet and R.E. (“Tip”) Foster, the only man to have captained both England’s international cricket and football teams. Unlike his teammates, Shannon didn’t play for a County Championship side in the summer, deciding to head home to Newfoundland for the remainder of the season. Back in St. John’s, he played for a local representative team against an amateur club from Boston.

In and out of the team, Shannon struggled in his second season in England. However, he featured for Oxford against Cambridge University, a prestigious annual match held at Lord’s Cricket Ground, London. In 1901 Shannon returned to Newfoundland for good, failing to graduate from university. He is now remembered as one of only three first-class cricketers to hail from Newfoundland. (Interestingly, his stepfather’s second cousin, William Bowring, is another, having played for the West Indies and Barbados.) In 1903 he created Shannon Park in Harbour Grace, the community’s first official recreational field; the park was used largely for cricket and football matches.

After returning from England, Shannon rose through the ranks in his stepfather’s company, Bowring Brothers, eventually becoming director. In January 1908 he married Alice May McGowen at the Cathedral of St. John the Baptist in the capital city. Their daughter, Elizabeth (Betty) Shannon Munn, was born in 1914.

When World War I started in 1914, Shannon, too old to enlist, was eager to contribute. He served as the treasurer for the committee assigned to raise money to fund the Newfoundland Regiment, the Newfoundland Patriotic Association. One of the ships in Bowring’s employ, the SS Florizel, famously carried the Regiment’s first five hundred men, the ‘Blue Puttees,’ to the United Kingdom for training.

Tragically, Shannon met his end on the same ship in 1918. Travelling with his daughter and nursemaid, Constance Trenchard, he was on the Florizel when she was reassigned to passenger service between Newfoundland and New York. The three had planned on visiting Alice, then in New York, and heading to Florida for a brief vacation. However, their plans were dashed when disaster struck on the night of February 23-24, 1918. Caught in a storm near Cape Race, Newfoundland, the ship made a navigational error and crashed off Horn Head Point, near Cappahayden. 94 people were killed, including Shannon, Betty, and Constance Trenchard. 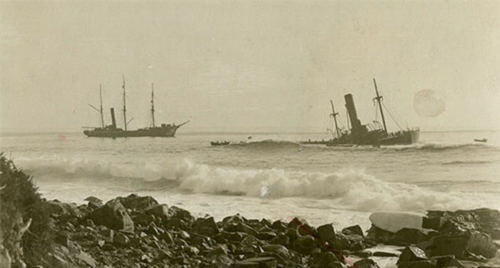 After their deaths, J. Edgar Bowring commissioned George Frampton to sculpt a Peter Pan statue in Bowring Park. Still a landmark in the park today, the piece is dedicated to the memory of Bowring’s granddaughter, Betty. A matching statue, also sculpted by Frampton, can be found in London’s Kensington Gardens. 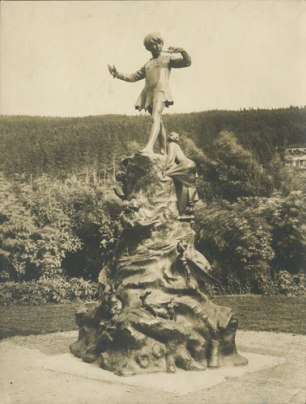 This post is part of the Harbour Grace Notebook series. Follow the updates on social media with the hashtag #hgnotebook. Post written by Matthew Gerard McCarthy (Communications Officer) for the Conception Bay Museum, Harbour Grace.

Author’s note: If you want to know more about John Shannon Munn’s sporting history, I highly recommend Dave Liverman’s excellent essay on Cricket NL. Also, Admiralty House’s “Faces of the Florizel” exhibit is worth visiting if you wish to know more about this Newfoundland tragedy.