Racing against time was rapidly gaining speed among aviators in the early 1930s, continuing the ever-accelerating sprint to modern aviation. Transatlantic flights, while still undeniably treacherous and popular among aviation enthusiasts, were no longer the fad. Successful around-the-world flights completed at an ever-faster pace dominated the imaginations of North American aircraft crews. The record for circling the earth in a heavier-than-air machine was held by the Graf Zeppelin, which made the trip in 21 days. This record remained unchallenged until June 23, 1931 when Wiley Post, Pilot, and Harold Gatty, Navigator, took off from New York in the “Winnie Mae”, on the first leg of what they hoped would be a ten-day flight around the world.

The “Winnie Mae” hovered over a newly landscaped Harbour Grace Airport on the surprisingly hot and still June morning. It was 10:42am when the crew glided to a graceful landing, reminiscent of the effortless perching of the bald eagles sometimes spotted around the community. Unlike the peaceful descent, when Post and Gatty emerged from the “Winnie Mae,” the airport became hectically intense. Walking towards Magistrate Casey with frantic vigor, the crew flatly refused a formal announcement and dismissed the townsfolk, grimacing as if straining to get away from the prying eyes of the public, subsequently powerwalking down the nearby dusty dirt descent determined to depart Harbour Grace quickly. Like many aviators before them, Post and Gatty went to Cochrane House, but they just ate hurriedly. The slightly disappointed residents trickled away from the airport, surely mumbling in aggravation. 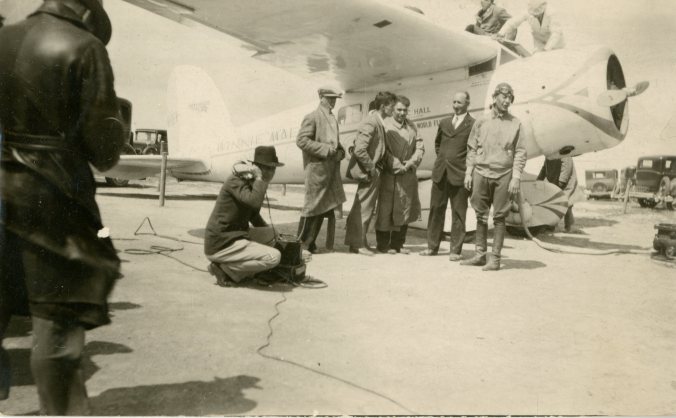 Post (right), trying to get away from town officials

Local mechanics tinkered with the sublimely constructed “Winnie Mae.” With a wingspan of 41 feet, length of 27-feet 8 inches, height of 8 feet 6 inches, and a 550-horsepower cylinder engine, the monoplane was steadfast. Residents surely remembered the flimsy and comical “Gipsy Moth,” which was a pipsqueak in comparison. Along with its sturdy make, the “Winnie Mae” was adorned with first-class technologies, courtesy of the obsessive Post. Its fuel capacity was 645 gallons, it had a Sperry Automatic Pilot apparatus, Radio direction finder, earth induction compass, and it was previously flown for under eight days. In short, the “Winnie Mae” longed for a strenuous, record-breaking flight, eager to flaunt its abilities. It would only take a positive weather report to set such a flight in motion, which came about three hours later, at 2:00pm. The “Winnie Mae” in Harbour Grace

High winds combined with pelting rain and a wall of dense fog North of the Azores threatened to delay Post and Gatty, but because that was the only concern, the crew decided to simply fly above the weather system. After just four hours in Harbour Grace, most of it spent impatiently waiting at the Cochrane House for the weather report from New York, the “Winnie Mae” was soaring above Water Street, bound for England. Characteristic of Newfoundland, the “Winnie Mae” encountered pestering tailwinds for the first 600 miles of their transatlantic connection. It is easy to picture Post and Gatty, intent on setting a new record for quickest round-the-world flight, fiddling with their top-notch equipment in a tedious effort to shake loose the tailwinds and anticipated cloud systems. Their persistence remained, and despite any minor obstacles, at 8:45am on June 24th they landed at the Royal Air Force Airdrome near Chester, England.

Location of the Azores

As if seeking to top the leaderboards in every category, the “Winnie Mae” landed in Chester, England after 15 hours, 48 minutes, which was 12 minutes less than it took Alcock and Brown to make their transatlantic crossing in the iconic “Vickers Vimy.” The usually focused and unrelenting Post leaned out of the cockpit with an exacerbated wheeze. As the damp fog and sprinkling drizzle hit their faces, Post and Gatty slowly gained their footing, legs feeling like Yorkshire pudding, and trudged through the muddied airfield. It is said that some locals volunteered to help the two walk to a resting area, as exhaustion gripped their cramped and stress-inebriated muscles. For most aviators, completing the transatlantic journey and dealing with all the physical or mental strain that comes with it would be enough, but Post and Gatty pushed onward, departing England that same day, and arriving in Hanover, Germany in the afternoon.

Over the next eight days, the “Winnie Mae” embarked on an excursion that would make even the worldliest contemporary travellers turn green with envy. On June 25, Post and Gatty reached Berlin, Germany, soaring over the famous 18th century Brandenburg Gate. After spending a night in Berlin, the aviators landed in Moscow at approximately 1pm, where they were invited by Soviet aviation officials to a lavish banquet at the imposing Leningradskaya Hotel. The following day they journeyed to Irkutsk, Siberia, 2,600 miles away. They followed the trans-Siberian railway route, flying over the jagged snow-capped Ural Mountains. Astonishingly, Post reported that the “Winnie Mae” “functioned perfectly” during this perilous stretch. On June 29th, the two landed at the nearly deserted fields known as Solomon, Alaska, after an energy-sapping 16-hour flight over the North Pacific. Suddenly, in a scary incident, Gatty was struck by the plane’s propeller after carelessly jumping from the cockpit upon landing in Solomon. Luckily, he was a sufficient distance from the propeller to receive only a cut requiring minor stitching. As if nothing happened, the “Winnie Mae” was spotted landing in Edmonton, Alberta, the following day. 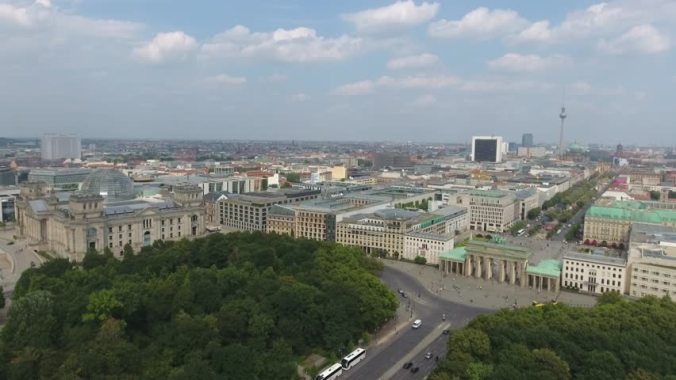 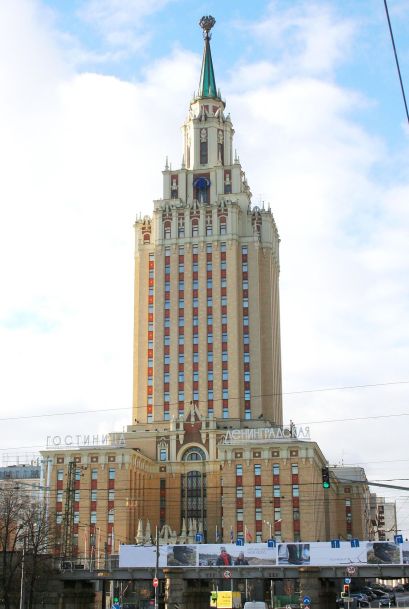 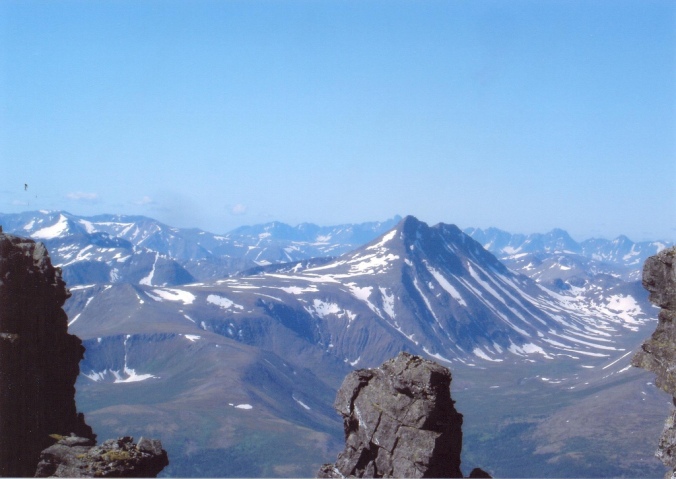 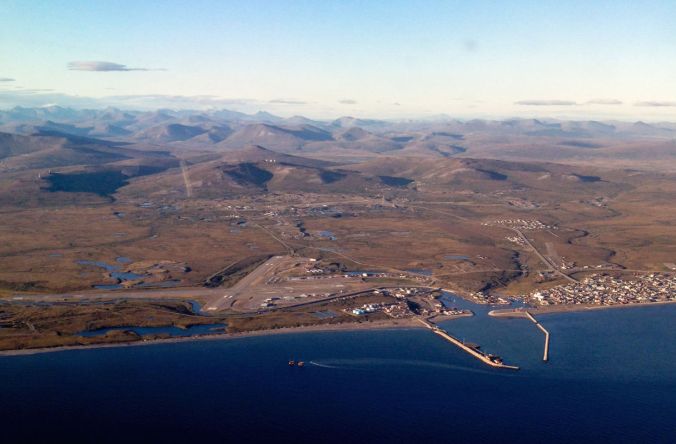 On July 1, 1931, at 10:17am the blasts of high-pitched sirens, thunderous applause, and blinding camera flashes greeted Post and Gatty as they descended into their newfound fame. The seductive skyscrapers of New York City enveloped the “Winnie Mae,” confirming the triumphant completion of the eight-day, 15 hour, and 51-minute round-the-world flight, crushing the previous 21-day record set by the Graf Zeppelin. New York Mayor James Walker welcomed Post and Gatty, declaring that they had joined the aviation greats and set new heights for human accomplishment. Among the crowds of reporters and civilians at Roosevelt Field that morning to greet them were some of those aviation greats, Charles Lindbergh, Chamberlain, Burt Acosta and William Brock. Post would go on to break the record once more in the “Winnie Mae,” but it was this flight in 1931 that wrote his, and Gatty’s, names in the aviation history books. 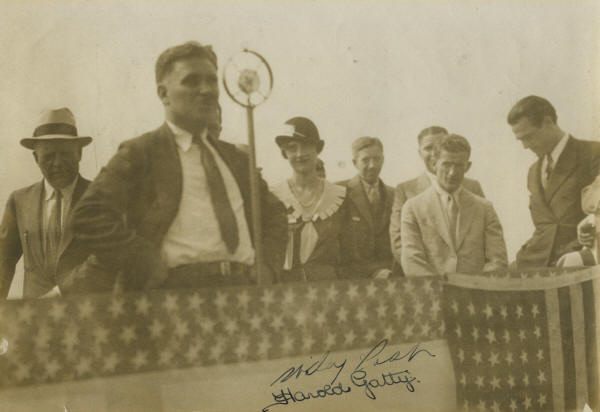 Parsons, B. and B. Bowman 1983 “The Challenge of the Atlantic: A Photo-Illustrated History of Early Aviation in Harbour Grace, Newfoundland.” Robinson-Blackmore Book Publishers: Newfoundland.