Near where Peter Easton established fortifications at Harbour Grace, John Guy landed salt on a beach. Guy called this beach Colston’s Cove, after his brother-in-law, William Colston, who maintained his plantation at Cuper’s Cove (Cupids) in summer 1611. Guy recorded this encounter in an October journal entry:

That night by sailing and rowing we came to Harbour Grace as far in as the Pirate’s Fort, where the bank ship [the Endeavour] was ready and where we remained until the 7th day of the said month [October] and in time did bring the bank ship ashore and land the salt upon the highest part of the ground and there put it in a round heap and burned it to preserve it. The old junks we left upon the beach; the quantity of salt was about fifteen tons. [Note: Excerpt edited by the author for clarity.] 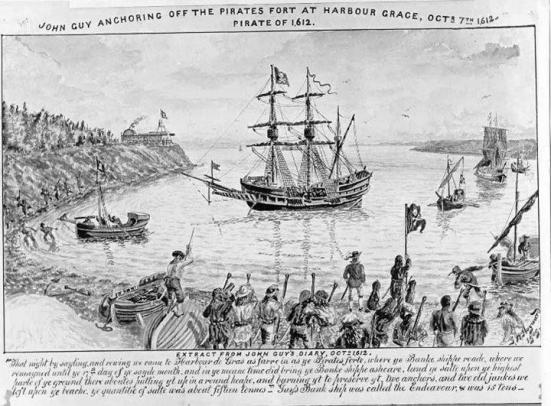 After Guy, Bristol merchants established a plantation near this same site, under the auspices of Robert Hayman, author of Quodlibets, the first book of English creative writing written in the New World.

In later years, Isaac Bradbury had a fishing stage on Colston’s Cove beach, and the site became known as Bradbury’s Cove. William A. Munn recounts the history of the beach in his seminal “History of Harbour Grace” (1933-39):

We now come to where Isaac Bradbury had his fishing stage, right in front of where we now find the Methodist Church stands at the present time. This property was purchased from the Garland family. The Bradbury family had aristocratic connections in the Old Country, and have always held a high name in Harbour Grace. Bradbury’s Cove is still known by that name, although the fishing stages have vanished long ago. Tradition says that this was originally Colston’s Cove, and this name dates back to 1610 when William Colston was right hand man with our first Governor John Guy…and where the salt was landed in 1612.