Calm seas do not make a skilled sailor. An adage reflective of Newfoundland’s history of hardship, development, and nautical experience, but also emblematic of the story of Lamont, better known as Lal, Parsons. Born in 1919 to Reuben and Gertrude Parsons, Lal grew up imbued with a tenacious work ethic reminiscent of his father, whose photography was essential in documenting the history of Harbour Grace. At 16 he faced danger wobbling on the ever-lopping waves of the Atlantic, fishing for the precious whale oil that warmed the houses of Harbour Grace, as part of the Newfoundland Whaling Company. Lal strained his aptitude and body mining for the Atlantic’s organic gold, unaware that distressing altitude would define his future four years later, when the world was drowned in chaos.

From 1939 onward the British Royal Air Force desperately sought aspiring pilots from the commonwealth nations as Denmark, Belgium, Holland, and France crumbled under the force of the mechanical German onslaught. British citizens scrambled to construct air defenses and shelters as the Luftwaffe began blotting out the sun. Lal Parsons, intrigued by the prospect of challenging adventure and the call from the former metropole, travelled to Nova Scotia and joined the British Commonwealth Air Training Plan, under the Royal Canadian Air Force. His training began immediately, Parsons often recalled training exercises which tested his reflexes, including a game in which the “pilot” with a control stick, had to line up three sets of lights as quickly as possible. Parsons excelled to such a degree that his fellow trainees told him “not to bother” checking the postings on the base notice board, as they felt it was certain he would be accepted as a pilot. Indeed, Parsons was. After becoming a pilot, Parsons was posted across Canada, to Toronto, Trenton, Saskatoon, Montreal, Montmagny, Moncton, and Dartmouth to name a few destinations.

Lal Parsons Standing Next to his Hawker Hurricane Fighter

Parsons’ duties were based on east coast defence, and included leading endeavours such as sector reconnaissance flights, altitude tests, formation flying, practice dogfights, and scrambles. In Dartmouth Parsons described the “scrambles” as “somebody pulling a horn, and pilots getting on their parachutes and getting airborne as quickly as possible.” This type of drill was designed to respond to an undetected enemy air force coming into view within minutes. It is easy to imagine the Newfoundlander sprinting as the blaring horn signalled an incoming emergency, shouting to his squadron to get airborne, while Hurricanes and Spitfires sputtered to life on the sunrise bathed tarmac. Soaring above coastal Nova Scotia within minutes, Parsons would gesture to his comrades to maintain defensive formation while peering at the crimson horizon, scanning for enemy bombers and their fighter escorts. No such confrontation would come to Canada, but Parsons’ piloting career became instantly exciting when, in June 1942, he was transferred, along with the entirety of his 125 RCAF Fighter Squadron, to Torbay, Newfoundland. 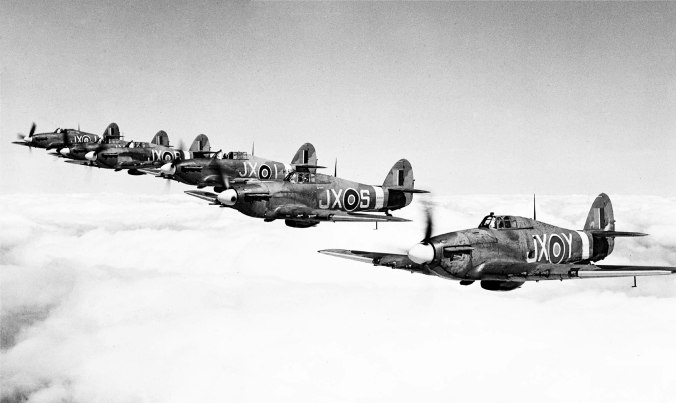 The “local boy” was coming home to Newfoundland, and the St. John’s Daily Star explained in excessively exorbitant exuberance, that Parsons exemplified a self-made man, one who, through gritty hard-work, went from floating on ocean currents to sailing on wind streams. The purpose of 125 Fighter Squadron’s transfer was to provide similar defence to that provided in Nova Scotia. Parsons was part of a readiness section that investigated suspicious sightings and unidentified aircraft. In February 1943, the squadron’s training was put to the test when intercepted radio signals suggested something had arrived just off Cape Race. Newfoundlanders were weary of German submarine attacks ever since the attack on Bell Island in mid-1942 which killed more than 60 servicemen, and 125 Squadron feared this could be another. Like a fish to a bait, Parsons scrambled to his Hawker Hurricane plane and took off to observe the entity. Peering down to the monstrous Atlantic below, Parsons saw nothing. Even had he seen a U-Boat, the .303 machine guns on the Hurricane were unlikely to do any serious damage.

Cleaning up the Wreckage After the Attack on Bell Island, 1942

This caused Parsons to ponder the potential for a depth charge dropped from a plane, as an anti-submarine weapon. After proposing the idea to Flight Sergeant A.S. Goodwin, a solution was discovered. Angled iron bars and springs from bunk beds in the military barracks were used, along with electrical arming mechanisms, to create racks that enabled Hurricanes to carry depth charges under each wing. It became known as the “bedspring bomb rack” and was a staple throughout the remaining years of the war. In March 1943, Parsons tested the device off Cape St. Francis, describing how the successful detonation of the dropped depth charge “just about blew the Hurricane out of the air and gave me one of the greatest frights of the whole war.”

During Parsons’ posting in Torbay, he frequented his hometown of Harbour Grace to the glee of the townsfolk. The dapper young man, dressed in his RCAF uniform, visited various community landmarks to interact with friends and town leaders. Parsons knew he would be transferred to England later that year to face real combat duty, so, in order to pay tribute to the town that raised him, he got the daring idea to fly his Hurricane fighter plane between the iconic spires of the Immaculate Conception Cathedral. By any stretch, it was crazy, the plane would have to be maneuvered to a diagonal degree to completely avoid clipping the cathedral’s wooden and metal spires. One can picture Parsons careening towards the spires, pulling the control stick at just the right angle, and calculating the time necessary to jolt the plane back upwards. However, in what is now a famous incident in Harbour Grace, he soared crisply through the spires, making it look easy. 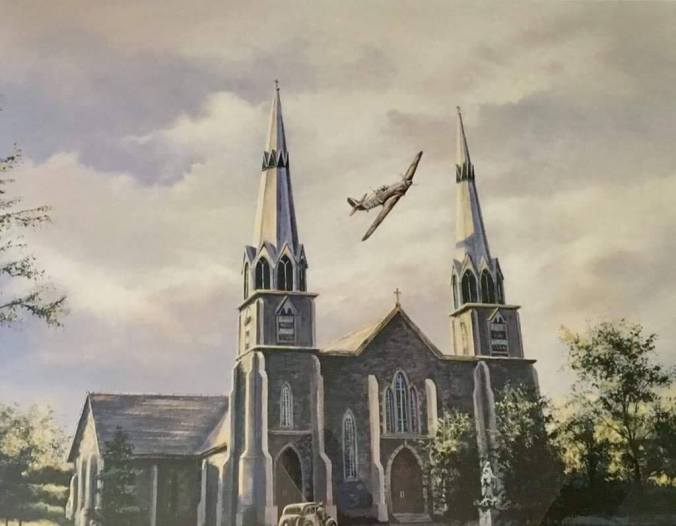 Rendition of Parsons Flying Between the Spires of the Cathedral, 1943

Lal Parsons’ story is a remarkable one, one that cannot be done proper justice in a 1000-word blog. However, Parsons himself was always humble when recounting his experiences during the second world war. He constantly deflected praise for his actions onto his fellow pilots, even when telling the stories of his postings in Europe, once providing coastal defence for the Scapa Flow Naval Base in Scotland, and also being involved in escorting key British cargo planes and bombers over occupied Europe. Parsons’ involvement in those endeavours aside, it is undeniable that his heroism not only inspired pilots who soared alongside him but built his reputation in Harbour Grace that persists to this day.