With ceaseless determination he dug his blades in, arms maximally extended, torso lunging to receive the quick pass. Colorado Avalanche goalie Jose Theodore, caught off-guard by the sudden impact of the high-velocity puck, frantically searched for it in a last-ditch effort to preserve his team’s game one hopes, however he was too slow. The puck tumbled, bouncing off his shoulder pads and hitting the ice, making split-second contact with those trying to prevent it from crossing the crimson goal line, and after several no-doubt breathtaking seconds for those on the benches and in the stands, the stadium erupted. The puck was in the net. The Detroit Red Wings would go on to beat the Avalanche in four straight games, advancing to the Western Conference Finals of the 2008 NHL Stanley Cup Playoffs. Harbour Grace native, and now Detroit Red Wings hero Dan Cleary fired that shot.

It may sound odd, but the connections between Harbour Grace and Detroit, Michigan are extensive. As noted in my previous blog, titled “Harbour Grace Takes Off” it was Fred Koehler, a representative of the Stinson Aircraft Corporation of Detroit, that initially sought to construct an airport capable of facilitating transatlantic flights, and decided on Harbour Grace. He was a central figure in organizing the meeting that established the Harbour Grace Airport Trust Company, and subsequently invested funds on behalf of the Stinson Aircraft Corporation and Waco Oil Company towards the arduous process of creating the Harbour Grace Airport. In addition to Fred Koehler’s essential contributions, he was present on August 26, 1927 to witness a high-wing monoplane hastily make its way to the brand-new Harbour Grace Airport, this was the “Pride of Detroit.”

Eight minutes after the residents of Harbour Grace emerged from their dwellings to gaze up at the mysterious airplane, many still in dusty coveralls or hand-pressed business suits from the day’s work, the “Pride of Detroit” landed. President of the Waco Oil Company Edward Schlee, and pilot William S. Brock jumped out of the plane, were greeted by crowds of inquisitive townsfolk, and were welcomed by recently elected President of the Harbour Grace Airport Trust Company, Magistrate John Casey. However, their stay was transitory, as in the crisp early morning hours of August 27, the two adventurers departed the Harbour Grace Airport, passing in the vicinity of Harbour Grace Island on the way to England, the next step on their around-the -world flight. Schlee and Brock desired to return to Harbour Grace after their journey, however a malfunctioning engine, leaking gasoline and scalding the plane’s innards, caused the two to abandon the endeavour in Tokyo, Japan. One could even guess that, because of the overheating, the plane developed red wings. “Pride of Detroit” at the Harbour Grace Airport 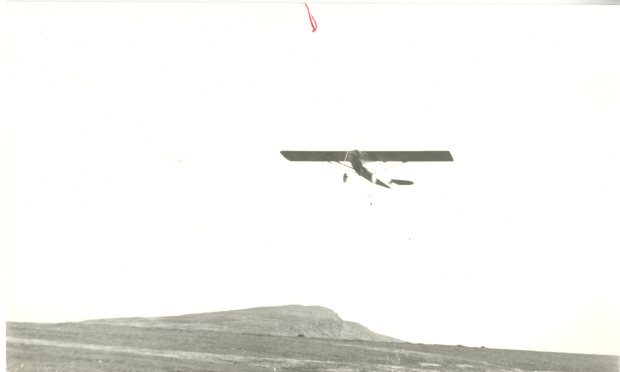 Regardless of whether Dan Cleary knew about the historical connections between Detroit and Harbour Grace, he was creating more as the Red Wings battled their way to the Stanley Cup Final, pitted against the formidable Pittsburgh Penguins. Cleary’s puck-luck was stuck since his goal against Colorado, without a point since. That changed in the first game, held at a chock-full Joe Louis Arena. Anyone who has attended a high-stakes hockey game has felt the anxious anticipation of anarchy, knowing that at any moment a raucous celebration could start. There was 3 minutes left in the third period when the puck, propelled by a quick slap-pass from Detroit’s zone, bounded off the corner boards in Pittsburgh’s zone. Using pinpoint hand-eye coordination, Cleary dangled the puck onto his backhand and took a swift shot which barely squeezed by the raised shoulder of Penguins’ goalie Marc-Andre Fleury. Just as it did against Colorado in the second round, the stadium erupted with rapturous applause and blaring goal horns. Cleary’s goal made the game 3-0 Detroit, and largely guaranteed the win.

Detroit seemed in control, but after staving off elimination with a nail-biting 4-3 triple-overtime win in the fifth game, the Penguins shifted the series back to Pittsburgh. The Red Wings maintained an uncomfortably close lead at all times throughout game six, only solidifying it when Henrik Zetterberg fired a skillful wrist shot from the hash-marks that trickled between Fleury’s clenched pads, sliding into the net as players from both teams tumbled into the crease. Although a late goal from the Penguins made it a 3-2 game, the Red Wings clung to their lead just long enough to wait out the clock, furiously defending in the neutral zone until the final buzzer sounded. In an instant, the ice was covered with Red Wings players and staff, after a grueling playoffs they had finally secured the coveted Stanley Cup. This made Dan Cleary the first Newfoundlander to win it, and given his immense contributions to his team’s success, it was fitting. In a subsequent interview, Cleary stated that the unwavering support from his hometown of Harbour Grace fueled his performance.

Support for Dan Cleary only grew when he brought the Stanley Cup to Harbour Grace on July 1, 2008. The community of approximately 2000 was besieged by 30,000 others clamouring to see the Stanley Cup and join the unrelenting partying. Escorted by the historic Harbour Grace Volunteer Fire Department, Cleary sat atop a pickup truck on the way to St. Francis Field, the location that once hosted the Handley Page “Atlantic” aerodrome. On the way, he displayed the Cup to crowds of cheering fans and passed by numerous heritage structures, including the S.S. Kyle, Harbour Grace Courthouse, and Immaculate Conception Cathedral. It was truly a sight to behold for a small town, thousands gathered at the field to listen to then Premier of Newfoundland and Labrador Danny Williams praise Cleary for his accomplishment, while Cleary hoisted the Cup in triumph. Cleary also allowed awestruck children to touch and take pictures with the Stanley Cup, I was one of them. While I am unable to remember much, I can recall a sense of pride in my community, not only for its hockey talent, but for its characteristic mix of down-to-earth, dedicated, and supportive people.

Cleary’s legacy is immortalized by the Danny Cleary Harbour Grace Community Centre, a new sports complex which sits just off the highway next to the entrance to Harbour Grace. Inside hangs a banner honouring Richard “Dick” Power, Cleary’s childhood coach whose sublime tutelage and passion drove Harbour Grace to hockey excellence. Whether it is through the journey of the “Pride of Detroit” or the Detroit Red Wings, Harbour Grace’s history is that of flying high.

Parsons, B. and B. Bowman
1983 The Challenge of the Atlantic: A Photo-Illustrated History of Early Aviation in Harbour Grace, Newfoundland. Robinson-Blackmore Book Publishers: Newfoundland.
Rowe, P.